At first when our son decided that he would like a Lego party, I was unsure of what I could do.  Pinterest definitely inspired many activity and food ideas.  Thanks to the amazing creativity of the other party mama’s, it helped shape our own Lego Crazy Party…  So here goes.. 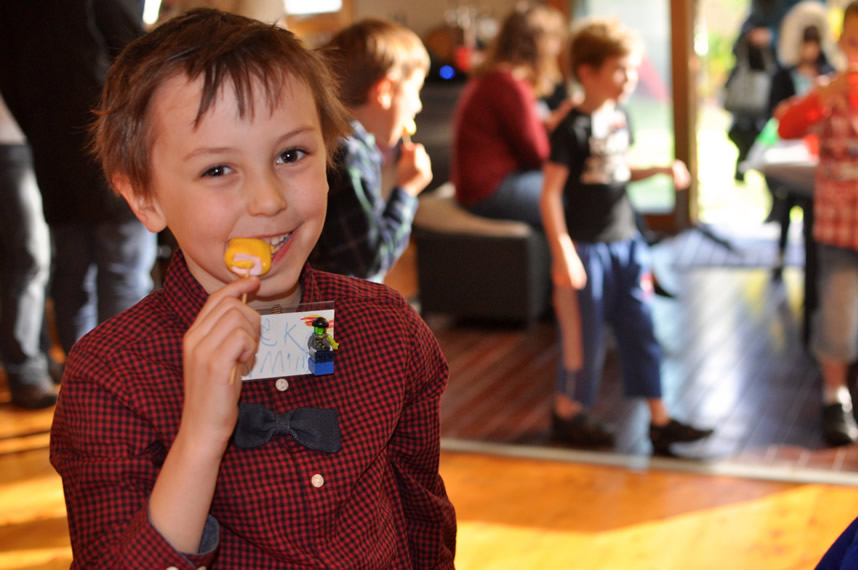 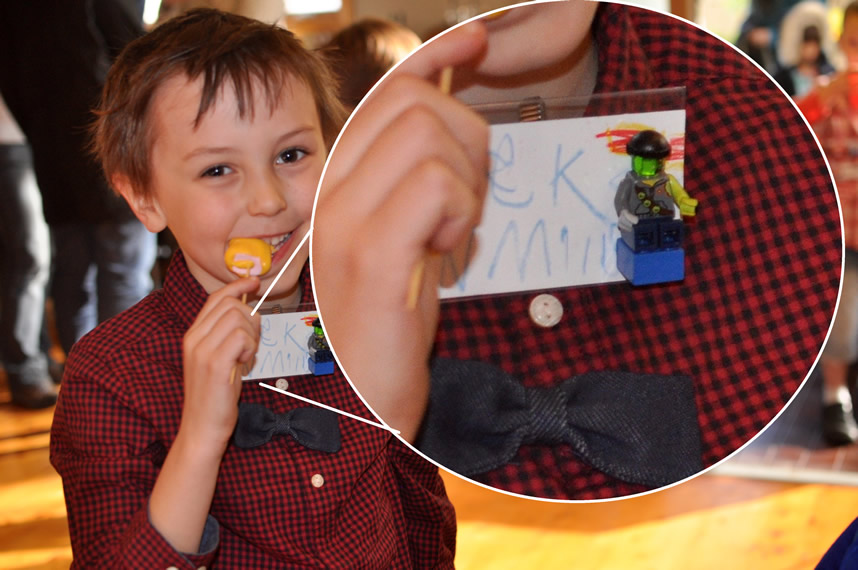 Build your own Lego man Nametag

Children were building as soon as they entered the party.  Their mini me awaits! Guess how many bricks in the Jar? Quiet games are the best! Let the building begin.  The best part of the party.  Ahh piece and quiet.. for now! Pin the Head on the Lego man

A party favourite with a twist! Make your own Lego Name Tag

Inspired by Legoland, the first task was a hit with the children.  I purchased clear name tags and used a hot glue gun to secure a small Lego brick for the Lego figure to sit on.  When the kids arrived, they created their own Lego figure choosing from separated legs, bodies, heads and accessories for the little guy/gal.  The only thing I wasn’t prepared for is the time it took to decide on their Lego man parts.  It was a big decision indeed:)  They then wrote their name on the piece of paper and needed assistance securing it to their shirts.  One task complete!

Who doesn’t like to colour in?  I printed and cut out oversized Lego figure outlines on different coloured paper.

Pin the head on the Lego Figure

This was a quirky twist on the original format.

How many Lego’s in the Jar?

Fill a jar with Lego pieces.  Hint count them as you fill the jar.  Closest guess wins!

It’s time to bring out the Lego

In a line were boxes of Lego’s sorted in various colours.  Each child was given chopsticks.  As you can imagine 20+ kids with chopsticks soon turned into 20+ drummers beating different patterns – enough to drive anyone a bit insane.  The only way to stop is to say ‘Sticks in the air!’  Luckily it worked long enough to explain the task!

1.  Each child was given a plate – the task was to see how many Lego’s they can grab with their chopsticks and place onto their plate – the most Lego pieces wins

2. The children are split into two teams.  They begin with a filled bowl of Lego at the beginning of the line, the task was to move the Lego from bowl to bowl down the line using only their chopsticks.  The first team to bring all of their Lego to the opposite side wins.

3.  In 10 minutes, how tall can you create a Lego tower without it falling?

5.  Lego Build! Whatever you create you can take home! 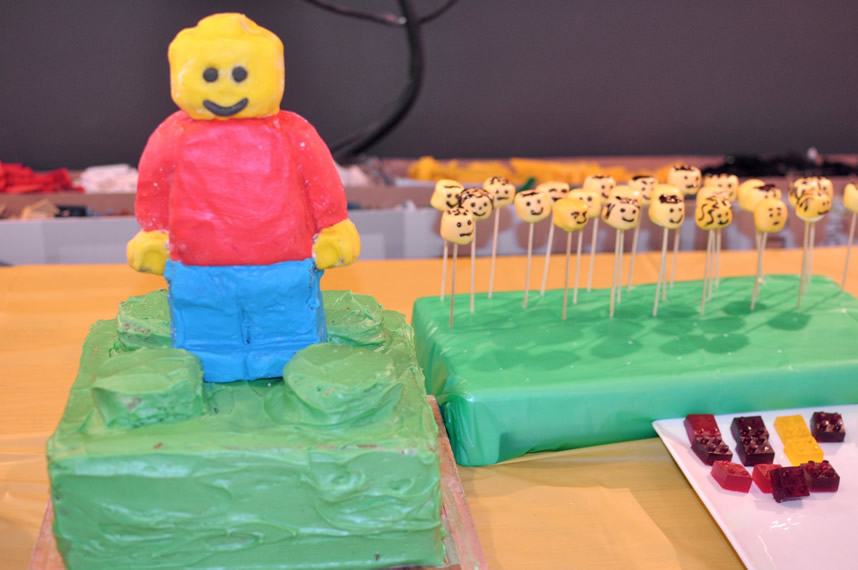 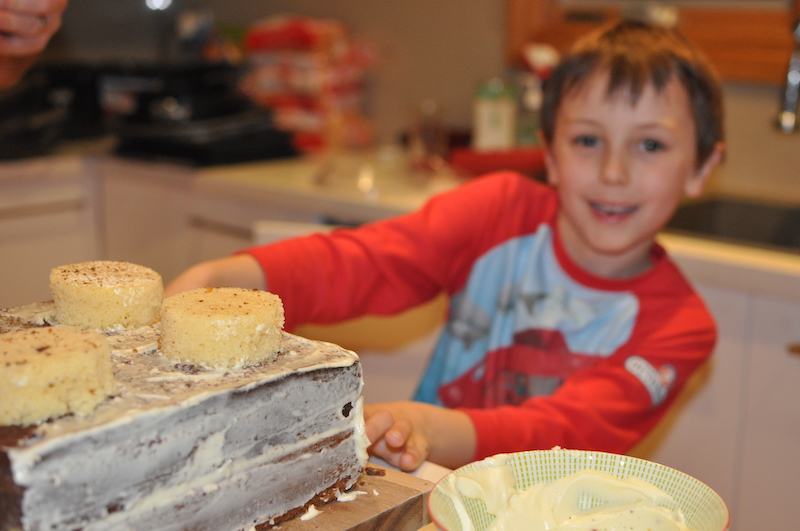 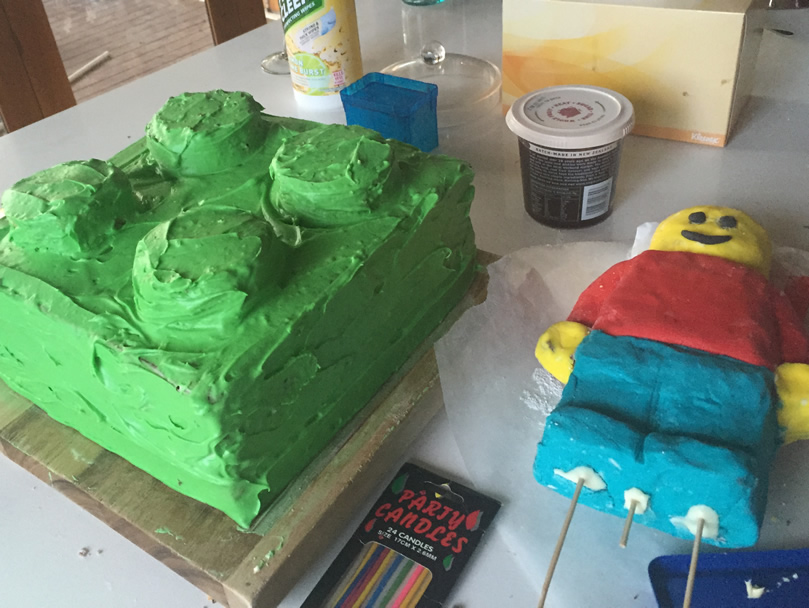 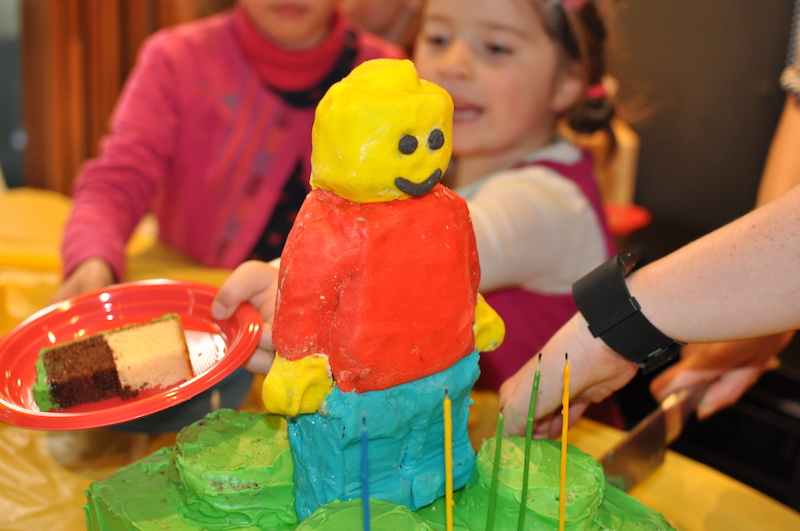 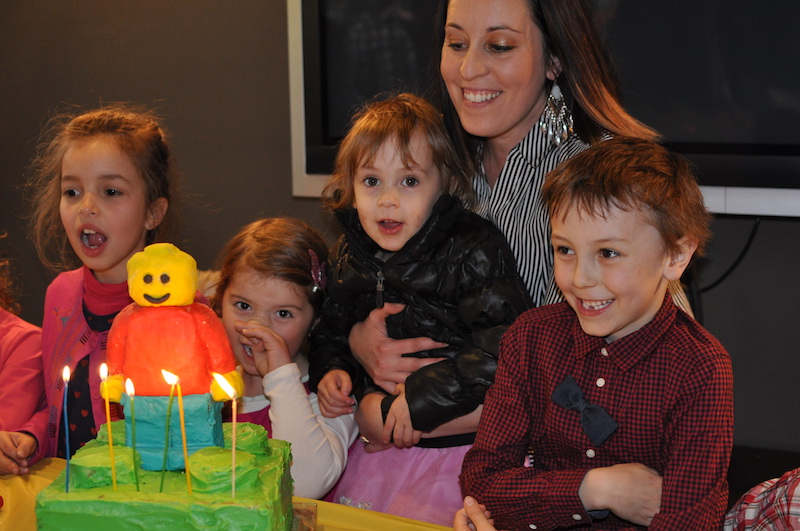 Ok so I had some help… I purchased a Lego Man cake mould from eBay!  Then it was just making the square brick and wrapping it all in fondant. 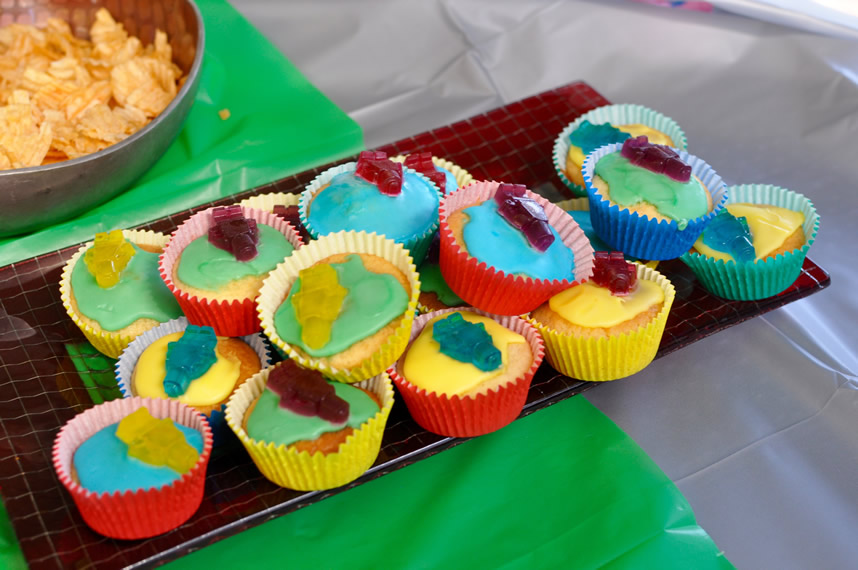 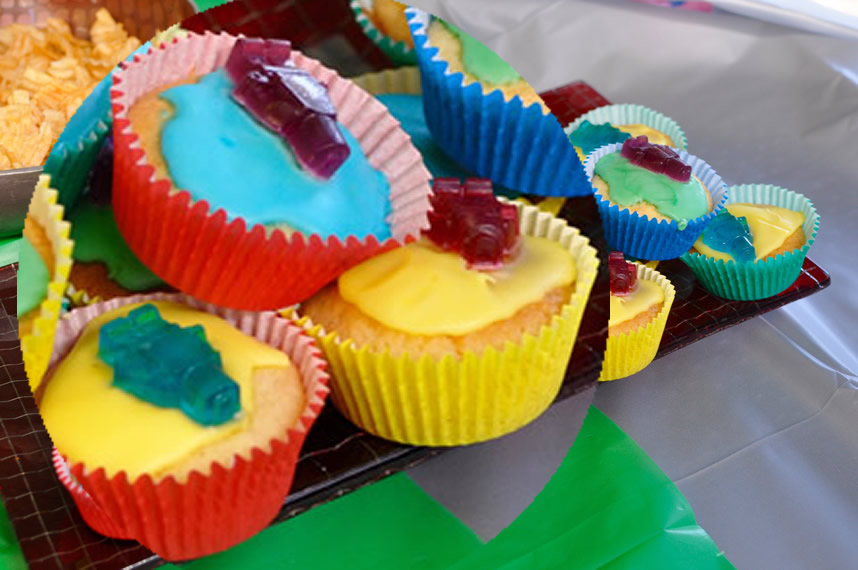 I purchased smaller Lego Figure moulds from eBay and used these in 2 ways.  One was as pictured with home made Gummy Bears as the cupcake toppers.

I know there is a heap of sugar here but all of the children also ate from the fruit and vegetable platters, Lego shaped sandwhiches, sausage rolls and Hot Nachos! 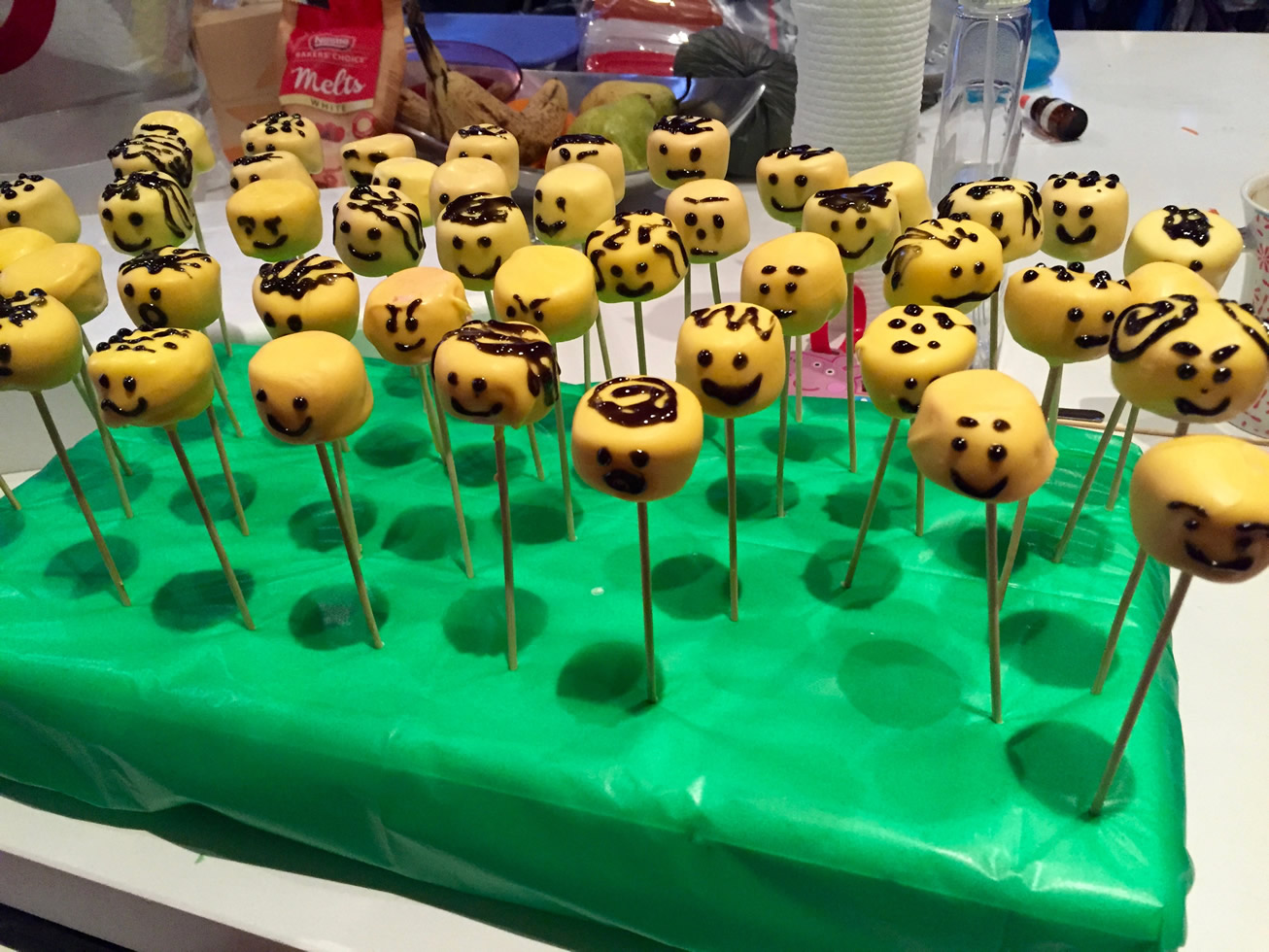 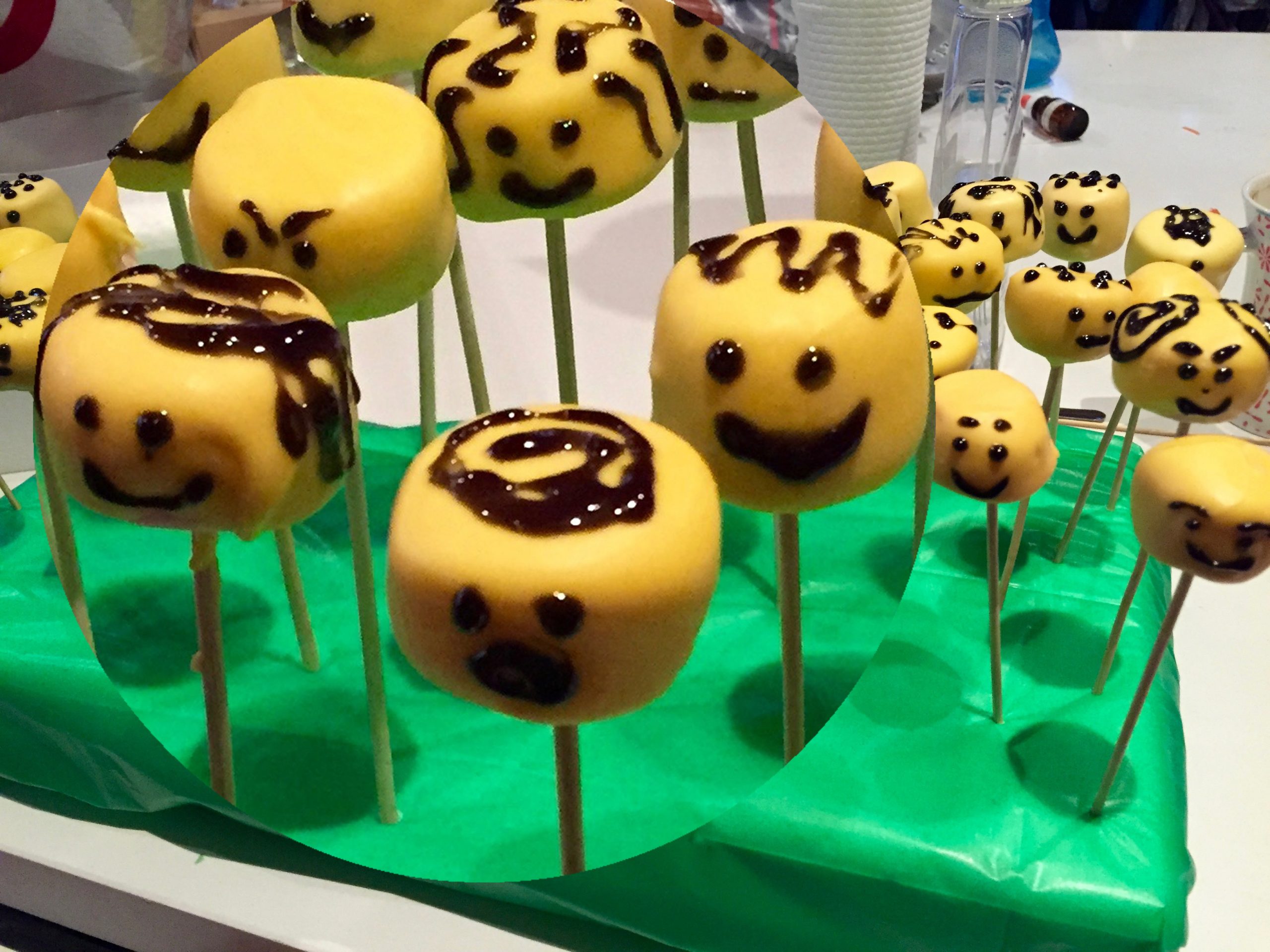 Marshmallows covered in yellow melted chocolate.  The faces were roughly drawn on by an icing pen.  (Yes rough indeed, some look they are should be in a scary film) 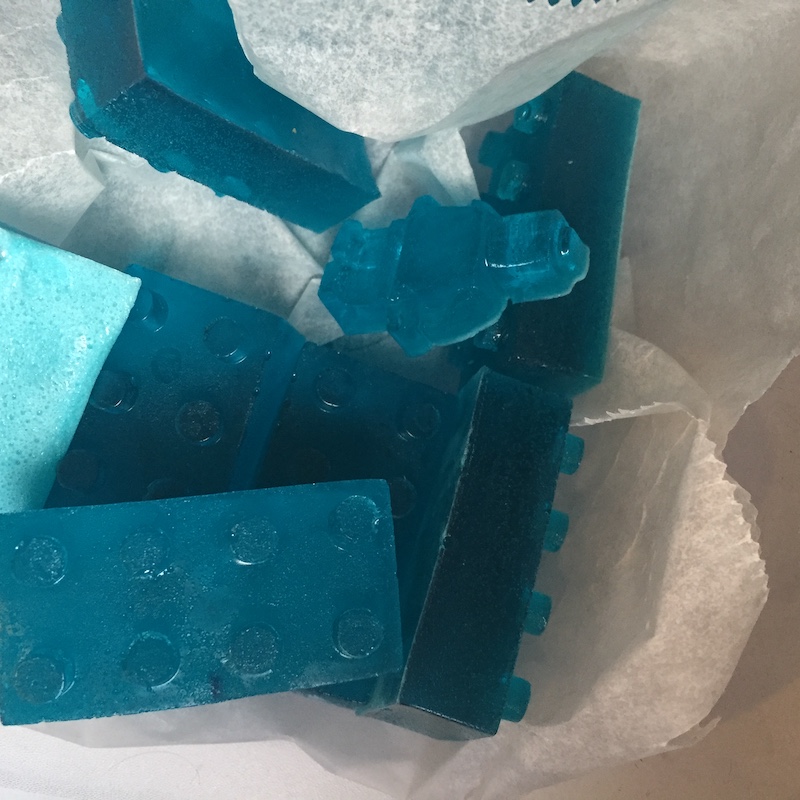 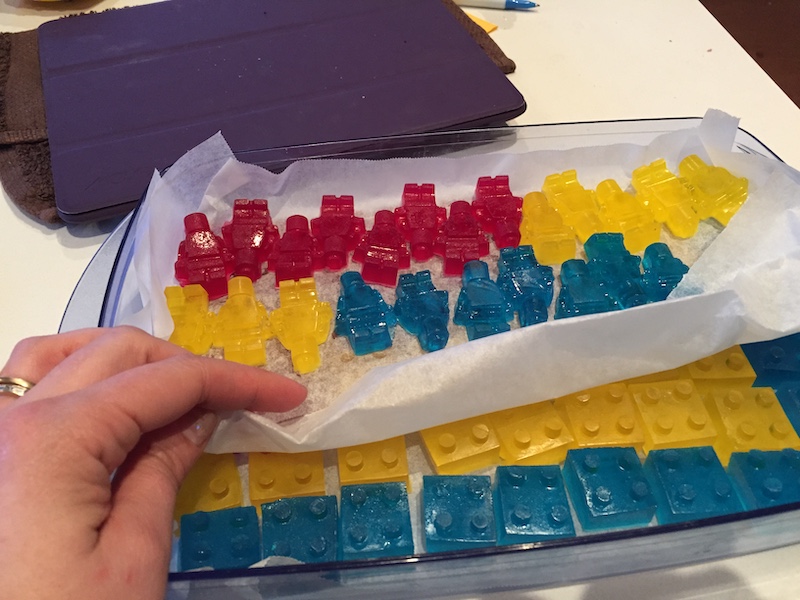 These worked out so incredibly well.  Why not make little gummy bears!  I had a platter of these at the party and as you can imagine, they did not last long. 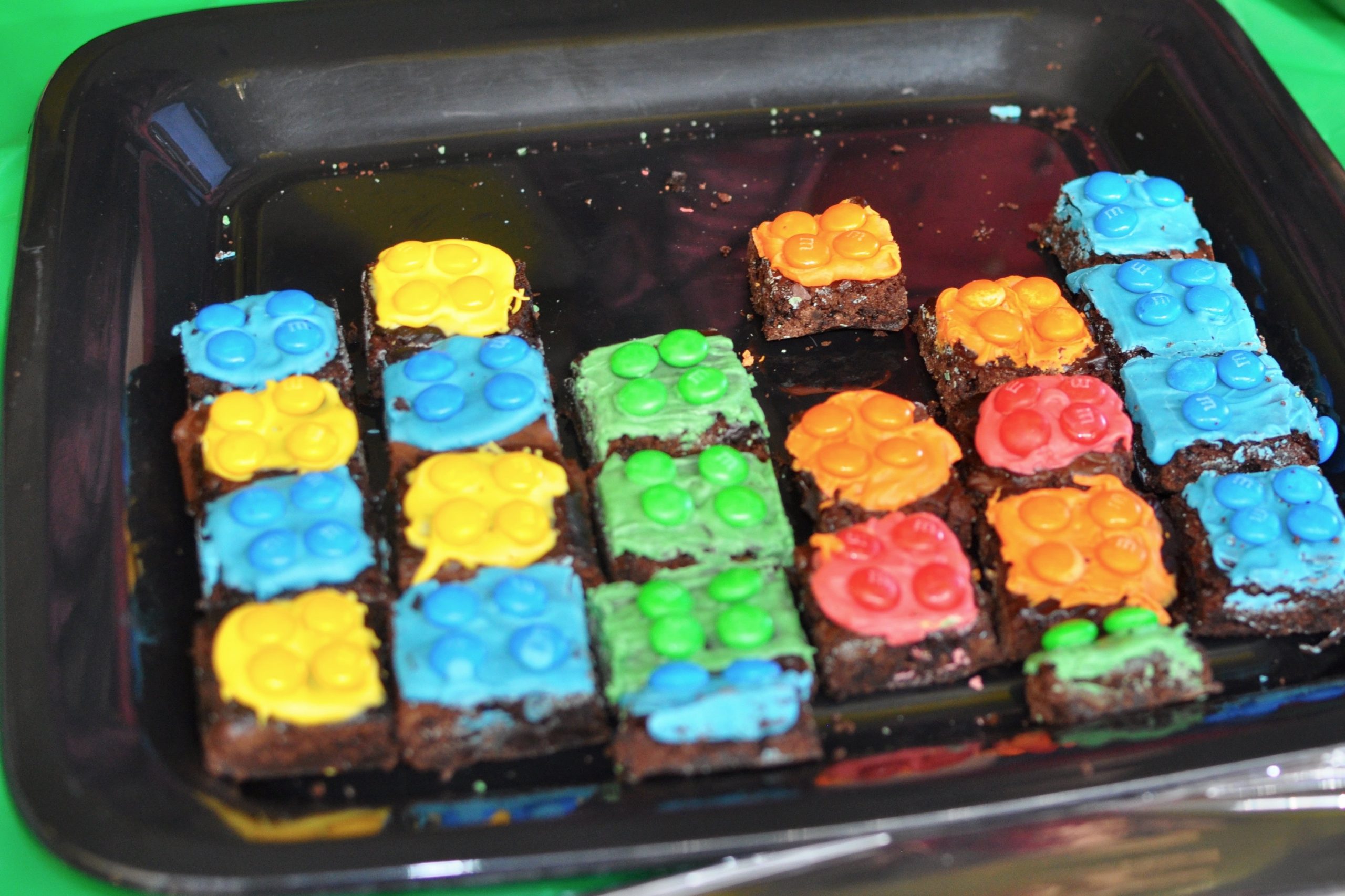 Who doesn’t love a chocolate brownie?

These were as delicious as they look!  Each brownie was covered in colour co-ordinated icing and smarties to make the bricks. I’m the first to tell you I’m always making things up as I go… I tried to secure the structure as best as I could with skewers and at the last minute placed it on the brick cake.  Phew!! it stayed in place! 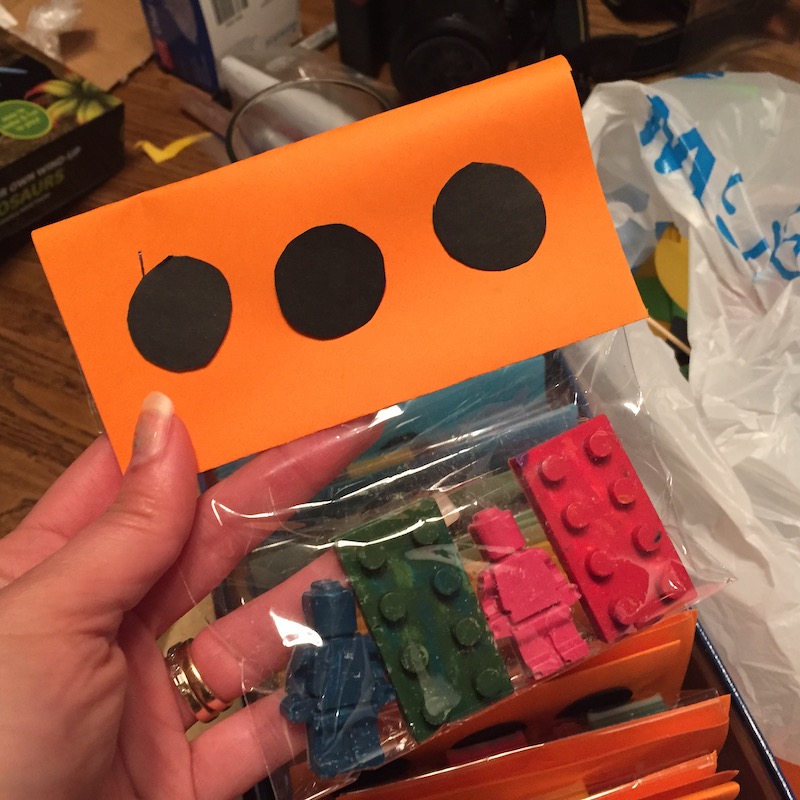 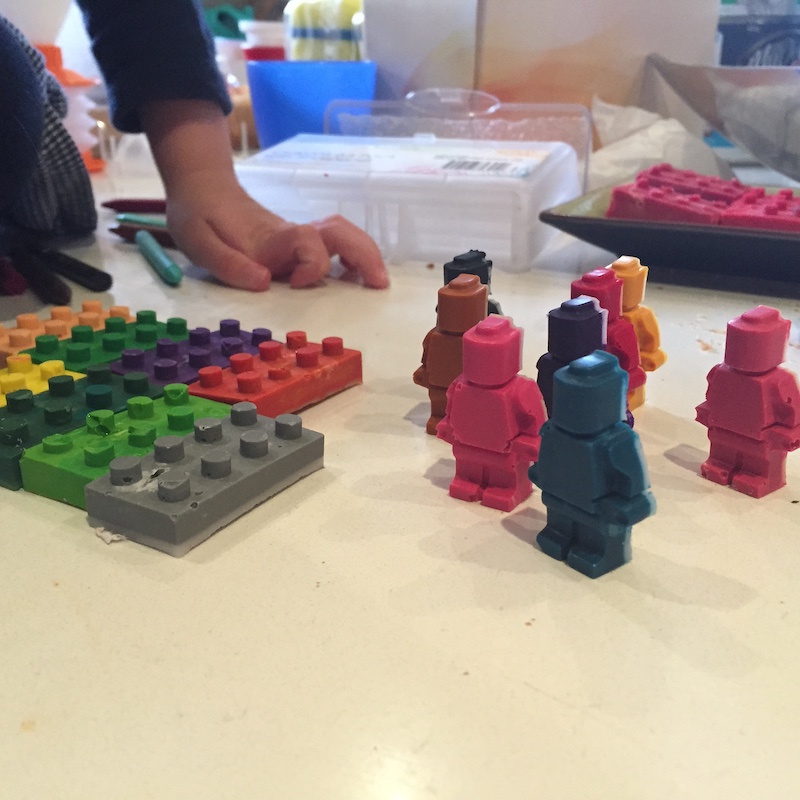 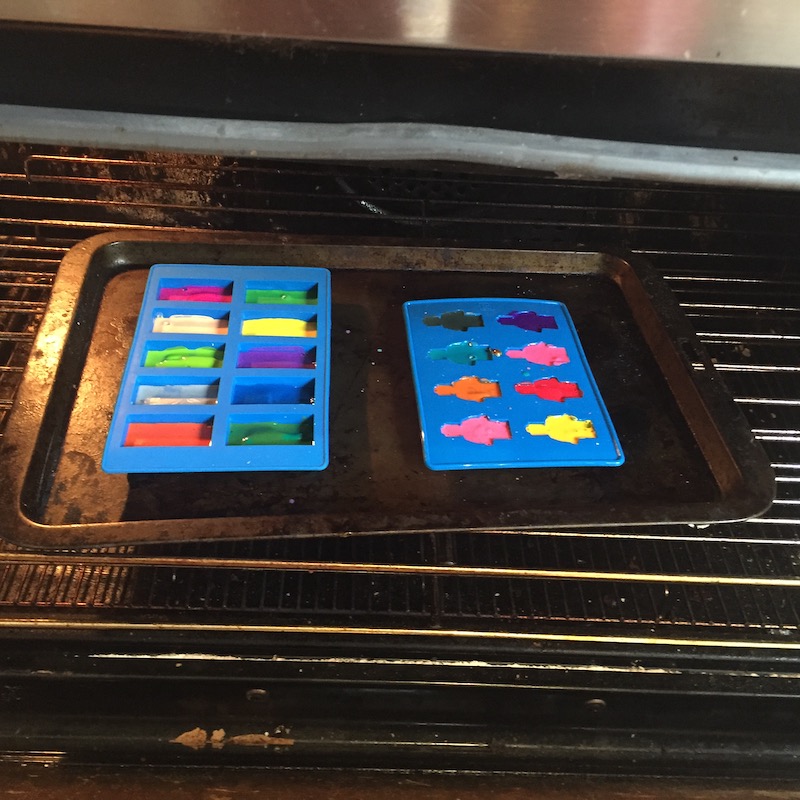 We used the Lego moulds not only to set the gummy bears but we also used them to make custom crayons!  These along with their Lego Creations were the party favors.

I have seen this idea and loved it.  In your clear soap dispenses, drop in a few Lego for a little surprise. I had extra Duplo Lego and decided to use these to build napkin, cutlery and plate holders.

Children are sure to know where the party is with a Large Lego Brick proudly sitting on the front door.  You can make this out of cardboard or with an old shoe box. 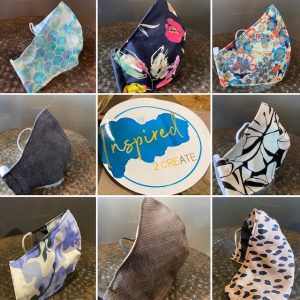